The transit navigation on the Azov-Don Waterway is to be closed officially as of December 1, 2017. This is the date when the Kochetovsky Locks is to stop operating for the winter period.

The actual date when the lock and the navigation equipment are to be put out of operation for the winter will depend on weather conditions, but it will be no later than December 1.

After this date, only fleet evacuation will be possible, according to the Azov-Don Waterway Basin Administration. Until December 1, navigation is to continue and ship owners can use the waterway.

According to SeaNews’ data, during January-October this year cargo traffic in the Azov-Don Waterway Basin was about 8.8 mn tons, 4.9% below the previous year result. 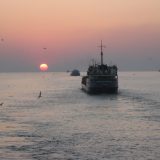