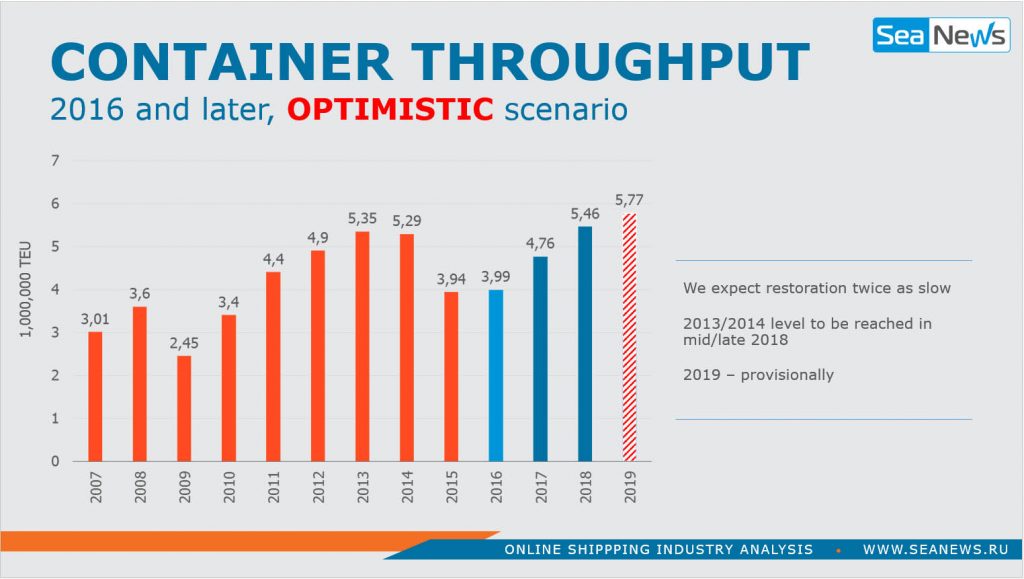 A little more than a year ago while speaking at the TransBaltic conference in St. Petersburg we made a short-term forecast of container traffic via Russian sea ports in  2016-2017-2018.

We expected container throughput of 3.99 mn TEU in 2016. In fact, the Russian sea ports handled 3.999 mn TEU, according to the official statistics.

Our forecast for 2016 was 99.8% true to life, which might be not such a big deal taking into account that it was made just two months before the year-end.

Now that the year of 2017 is close to an end, we are obliged to say that SeaNews forecast for 2017 is also coming true – and, importantly, the optimistic scenario is being realized, the imprecision being just under 3%.

In our presentation, we considered two possible variant of market development in 2017, the pessimistic one with envisaged stagnation or minimal growth, and the optimistic scenario envisaging growth.

In our estimation, the optimistic scenario was to realize, which is happening now. For details, see our presentation at TransBaltic 2016.

We expected that in 2017 the Russian sea ports would handle some 4.76 mn TEU. So far, during the 10 months of the year, their container throughput made 3.81 mn TEU.

In case of no force-majeure, by January 1, 2018 the Russian seaports should handle 4.6 mn tons.

The correlation model we used has proved valid for analyzing container shipping market allowing to reveal macro- and microeconomic dependent trends and other factors.

We consider making short-term and medium-term forecast on a regular basis. We will announce such services in a due course.