The terminal assets of NCSP in Novorossiysk (these include Novorossiysk Commercial Sea Port proper, Importpischeprom / IPP, Novoroslesexport, Novorossiysk Shiprepair Yard / NSRZ and Novorossiysk Grain Terminal / NZT plus Novorossiysk Black Oil Terminal NMT, which is a joint venture between NCSP and Black Sea Mainline Pipelines) handled 69.5 mn tons, 2% more than during the 10 months of 2016.

Oil products traffic decreased 4.4% to 25.1 mn tons. In Novorossiysk, this commodity was down 8% to 13.7 mn tons, while Primorsk increased products throughput slightly by 0.3% to 11.4 mn tons.

Solid bulk throughput was up 35.7% to 13.6 mn tons, much due to the growth in grain and coal handling.

Despite some restrictions imposed on Russia’s grain export in Turkey, this country still rates the first among those importing Russian grain, and grain traffic via Russia’s deep water Black Sea ports including Novorossiysk is growing. In January-October 2017 NCSP handled 3.5 mn tons of grain cargo, up 64.1% year-on-year.

Growing demand in the global coal market has stimulated the export of this cargo via Russia’s sea ports. In NCSP, coal handling increased 15.6% to make 1.7 mn tons.

Other cargoes grew – non-ferrous metals were up 2.1% to 953 thousand tons, and perishables surged 6.9-fold to over 218 thousand tons.

Container traffic grew both in Novorossiysk and in Baltiysk.

Excise Goods Import and Export
In January-October 2017, Russia increased volumes of vodka export 3.9% year-on-year to 1.67 decalitres […]
Only for subscribers
AprilAugustExportImport
0

Freight market of Baltic and Northwestern Europe, week 48
During the 48th week, freight rates in the Baltic and in the North Europe […]
Only for subscribers
2017BalticFreight rates
0 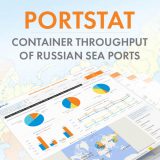