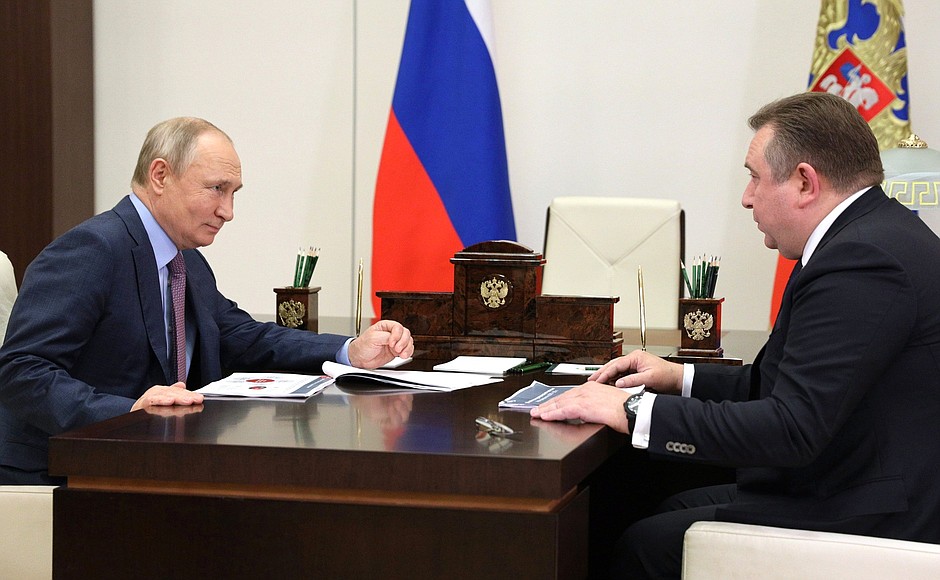 Vladimir Putin held a meeting with Alexei Rakhmanov, Chairman of the Management Board and CEO of United Shipbuilding Corporation who told the President about the Corporation’s results and plans.

‘The order portfolio is very good: we are booked up until 2028 thanks to the support measures that were extended to the industry by the Ministry of Industry and the Government as a whole’, Rakhmanov said.

‘Last year, we commissioned eleven naval ships, which is one of our best results. We continue tightening the discipline to meet project deadlines. But we are dependent on suppliers of large-size equipment who let us down rather significantly. But I hope the situation will gradually improve’.

‘We are zealously working on new products. In the case of civilian shipbuilding, I am referring to the opening of basically new segments, including, for example, small boats, which few businesses have dealt with in a systematic way, and, accordingly, solutions for Russian cities as regards riverboats and cruise ships’.

‘We are focusing on the South-North corridor, primarily the Caspian Sea. This year, we are starting to design a container ship that will ply the Caspian Sea with Helsinki as its final destination. In this way, we will be opening up routes that do not depend on foreigners’, Rakhmanov said.

‘It is possible to load cargo in northern Iran or western China and take it to Helsinki via the Olya port [in Russia]. It will take the ship only seven or eight days to reach Helsinki from Olya at 19 kilometres per hour. Moreover, there will be no problems with Somali pirates or ships blocking the Suez Canal. This is, in fact, a real alternative. The main question is the cost of this shipment. We are working on it jointly with shipping companies’.

According to Rakhmanov, from the Volga, the route will continue to the Volga-Baltic Waterway and the Moscow Canal, ‘from which we will move north and then on directly to St Petersburg. If necessary, we can go as far as the White Sea, which is possible. The scale is a bit smaller there, therefore the payload will be smaller as well’.

‘Our biggest problems are near the city of Gorodets near Nizhny Novgorod. Unfortunately, the draft is no more than 2.6 metres there, whereas we need a 3.6 metres cargo draft to meet the requirements of our main shipping companies and passenger liners’, he added.