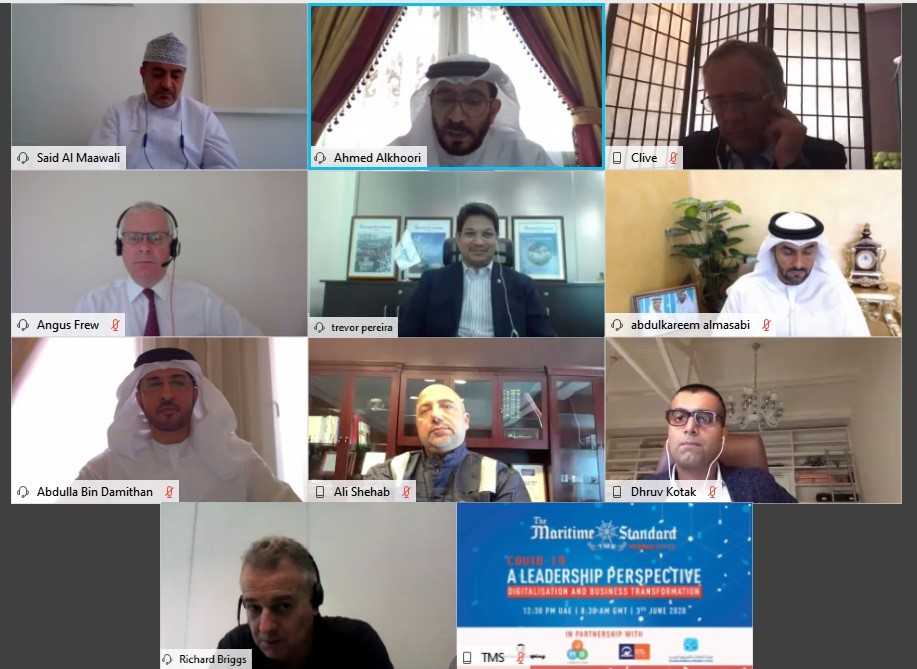 With a virtual audience of around 800 listening in from the outset, The Maritime Standard’s third Covid 19 — A Leadership Perspective Webinar, on 3th June,  focussed on the impact the pandemic is having on digitalisation within the maritime sector and how it is transforming the way businesses operate. There was a consensus amongst the distinguished panel that digitalisation was a ‘game changer’ and that the industry is going through a series of changes driven by new technology that will not be reversed when the pandemic is over.

H.E. Ahmed Al Khoori, Director General of the UAE Federal Transport Authority Land & Maritime, reflected that, although these were testing times, the pandemic had created a chance to revisit issues that the industry needed to look at more closely, including digitalisation. “Digitalisation is inevitable now,” he said. “The crisis has speeded up activity in so many areas within the maritime business that needed to be digitalised.”

Angus Frew, Secretary General and CEO of BIMCO, added, “The use of digitalisation and new technology has certainly been accelerated by Covid-19 and the past few weeks have shown how fast we can adapt to new ways of working.” Abdulla Bin Damithan, Chief Commercial Officer of DP World, UAE Region, agreed with the assessment that Covid-19 has moved forward, rather than caused, digitalisation initiatives, and in particular highlighted the benefits of the much greater rate of digital information exchange now taking place within the industry.

Capt. Abdulkareem Al Masabi, CEO of ADNOC Logistics & Services, noted that for his company the most positive thing to emerge from greater digitalisation during the pandemic was better engagement and communication with employees at sea. ADNOC L&S has recently launched virtual ‘town hall’ meetings with masters and crew which had proved very successful.

Said Al Mawani, CEO of both Oman Shipping and Oman Drydock, suggested the crisis had given organisations a greater understanding of the different ways of working enabled by digitalisation. “Big changes have taken place in recent weeks, but they are only the tip of the iceberg,” he said.

Ali Shehab, CEO of Kuwait Oil Tanker Company (KOTC), welcomed the fact that the crisis had created the impetus needed to shift from ‘where we were to where we want to be’, while Dhruv Kotak, managing director of JM Baxi in India said that the pace of change had been much faster than anticipated. “By the time, the crisis is over we will have robust digital tools in place right across India,” he added.

One of the most respected maritime lawyers, Richard Briggs, Vice Chairman of Emirates Maritime Arbitration Centre (EMAC), concluded his remarks by stating that, while digitalisation had shown what was possible during the pandemic, the experience had also shown the limitations of existing systems. There was no room for complacency, he suggested, and much more work needed to be done to address these issues and iron out the ‘wrinkles’ in digital systems.

Clive Woodbridge, TMS Editor and Webinar Moderator, concluded, “Covid-19 has been a seismic event for shipping and the challenges arising from it have been significant and severe and will impact the business for a long time to come. However, there have been positives as well as negatives and the move to greater digitalisation is one of them. The Webinar highlighted the  permanent nature of these changes,  but also identified some issues that need to be addressed going forward, including the requirement for different leadership skills and styles,  the willingness of staff to change and adapt to new ways of working and a need to guard against an increased risk of cybercrime.”

Sponsored by Tomini Shipping, Islamic P&I Club, EMAC and JM Baxi the Webinar was watched by an international audience, many of whom submitted tough questions for the panelists to answer in the second half of the two hour Webinar.

The Maritime Standard will be staging a fourth Webinar in the series on Wednesday 17th June. This will also focus on digitalisation and transformation, reflecting the huge interest in this topic.