GEFCO has completed the first run of a full container loaded train from China to France. According to GEFCO, the train transported 40ft containers with car parts for Peugeot Citroën Automobiles from Wuhan, China, to Dourges, North of France.

The train left Wuhan on November 3 and arrived to Dourges on November 22, covering 11,000 km in less than 3 weeks at an average pace of around 600 km per day. The route crossed the territories of China, Kazakhstan, Russia, Belarus, Poland, Germany and France.

The United Transport and Logistics Company (UTLC) provided services on the 1520 mm railway section between Dostyk (Kazakstan) and Brest (Belarus). GEFCO managed and coordinated the project, with the railway partners in the different countries, together with the teams of GEFCO Forwarding based in Shanghai, Moscow and Paris.

After the successful test run GEFCO intends to continue the service on a weekly basis. In addition to PSA, other French companies may be interested in such trains.

This first full container loaded train is part of the One-Belt-One-Road initiative introduced by the Chinese government to take advantage of the new Silk Road itinerary linking China to Europe.

According to GEFCO, rail freight is complementary of air and ocean freight, as it has competitive advantages both for economic and ecological reasons for time critical goods, such as automotive parts, electronics products coming from China, and in reverse flow, consumer goods, reefer services, and spare parts for Chinese aftersales market. Customers transport time is reduced by half compared to the ocean freight. Compared to airfreight, rail is much lower in price and produces less pollution to the environment.

GEFCO manages a monthly average volume of 300 TEU transported by rail in both directions. 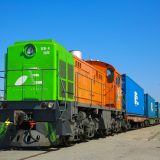 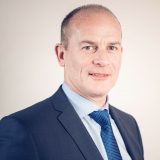 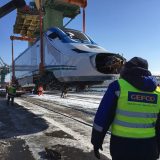 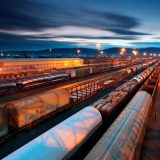 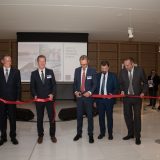 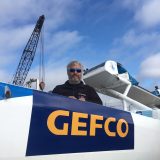