Bound for her permanent operational base on the Sakhalin Island shelf in the Sea of Okhotsk, the vessel covered a high-latitude route without the assistance of an icebreaker, despite the late stage of the Arctic Ocean navigation season and challenging ice conditions along several route segments.

During this passage, “Fedor Ushakov” safely covered 2,194 nautical miles (4,063 km) from Cape Zhelaniya (the Novaya Zemlya Archipelago) to Cape Dezhnev at Chukotka, the easternmost point of Russia’s mainland. According to SCF, the vessel covered the distance in 8 days 9 hours and 58 minutes, moving at an average speed of 10.9 knots (20.2 km/h), which tops the performance of many commercial vessels in ice-free open waters.

During the voyage, Fedor Ushakov exchanged information on the ice situation along the route with the NSR’s management, as well as Atomflot icebreakers, and was provided with all the necessary information and navigational data. During the voyage, the crew was bolstered with the addition of a second master/ice advisor, whose extensive experience in high-latitude navigation was very helpful both during the preparations for and throughout the voyage itself.

According to Alexander Kutlubaev, Captain of “Fedor Ushakov”, the transit voyage along the NSR proceeded in a regular mode along the entire route. Dmitry Kravchenko, Second Master/Ice Advisor, said: “On a number of voyage segments, “Fedor Ushakov” braved 50-60 cm thick ice fields with a snow cover of up to 20 cm and hummock ridges.  In terms of the ice situation, the most complicated stretches of the route were the Vilkitsky and Sannikov Straits. In the Sannikov Strait, the vessel came through a frozen one-year ice crust with a compression of up to 3 points and hummocks up to 2-3 meters high. The information on the ice situation gathered during the course of Fedor Ushakov’s voyage will be used in the planning and implementation of further operations involving SCF vessels along the Northern Sea Route.”

“Fedor Ushakov” is the third vessel in a series of four multifunctional ice-breaking supply and standby vessels built under a long-term agreement between Sovcomflot and Sakhalin Energy. The supply vessel “Gennadiy Nevelskoy” became part of the SCF fleet in the spring of 2017, followed by the standby vessel “Stepan Makarov” in the summer of 2017. “Fedor Ushakov”’s naming ceremony took place on 11 October 2017. All the vessels of the series will operate under the Russian flag and will be crewed by Russian seafarers, with St. Petersburg as their home port. 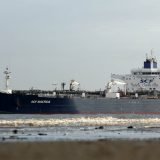 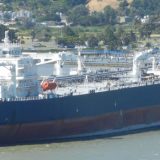 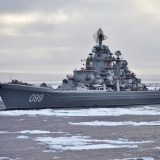 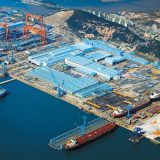 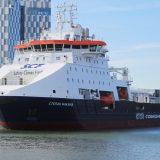 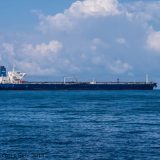 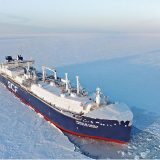 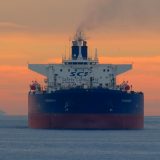